Maria Montessori was a brilliant scientist and teacher.  In 1892, she attended the University of Rome and there she became the first female doctor in Italy.  Early in her career, she was able to work with children with disabilities.  It was here that she first began to see that by using hands on manipulatives these children were often capable of more than anyone had previously assumed.  Thus began her formation of materials and a philosophy for learning.  Her beliefs were embedded in the idea that the children should be the catalyst for their own learning.

When we carefully prepare the environment with rich learning opportunities, they will thirst for the knowledge around them and learn in a very natural way.  We, at Montessori Canyon Academy, provide an authentic Montessori education through various curriculum areas such as, practical life, sensorial, language arts, mathematics, geography, science, and art.  Children are given the freedom to learn from these various areas at their own pace, in a loving, caring environment. 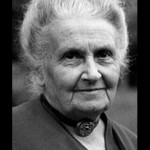